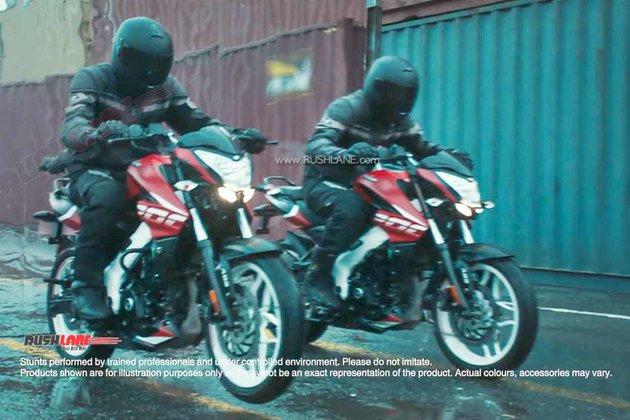 The new Pulsar TVC anthem is an ode to current times. Addressing the need to maintain 2 metre physical distance between folks (the yellow line markers), it talks about breaking barriers in the current world we live in, and the paths one will have to create. Pulsar TVCs have always involved spectacular stunts and catchy audio track. The latest release isn't any different.

The video features Pulsar RS200 and Pulsar NS200 motorcycles performing synchronized stunts at a deserted port. Like all the previous TVCs, the new one demonstrates the Pulsar models' sporty character and handling.

The video also revealed new color theme for the Pulsar NS200 street fighter. The RS200 on the other hand is represented in its existing blue and white colour theme. Take a look at the TVC video below.

The pair of new Pulsar NS200 examples featured in the video are swathed in new red and white dual-tone colour theme. The street fighter features white painted alloy wheels and chassis members for the first time in its existence. While the graphics on the fuel tank and its extensions are consistent with the existing model, the tailpiece seems to have fresh decals with a bit of black in the mix. There are no other visual changes to the naked motorcycle.

The new colour could be introduced sometime in the future but it is to be noted that the video features a clear disclaimer which reads as follows: "Products shown are for illustration purpose only and they may not be an exact representation of the product. Actual colours and accessories may vary." So, for now, we would not be expecting the red-white liveried NS200 to hit the showrooms.

The Pulsar nameplate has been a cash cow for the company for nearly two decades now. With regular updates, ever expanding lineup and constant marketing push, has been managing to keep the Pulsar brand the best seller it its segment. The iconic TVCs play an important role in shaping Pulsar as a youthful and energetic brand.

With the festive season upon us, motorcycle makers are gearing up for a significant increase in demand. The new-found preference for private transportation is also expected to reinforce the positive customer sentiment we usually see around this time of the year. The new promotional video comes right in time to take full advantage of the scenario.