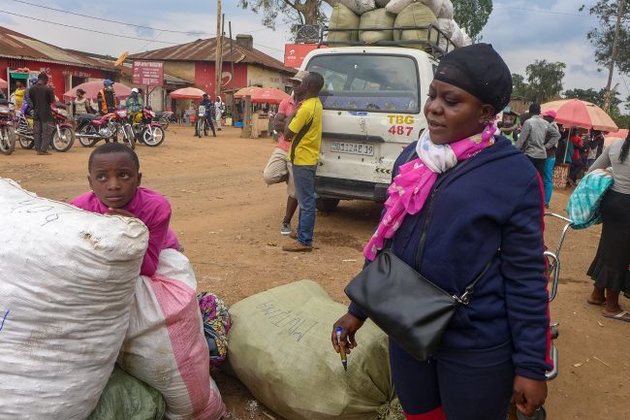 Kanyabayonga, an area of Democratic Republic of Congo known for killings and kidnappings, never needed restaurants because there were never any customers. Then local officials hit on an idea that changed everything.

KANYABAYONGA, DEMOCRATIC REPUBLIC OF CONGO - Most people familiar with Kanyabayonga, a mountainous area near the eastern edge of the country, refer to it as a place to keep moving.

But these days, a community once deemed too risky to venture through has transformed into an unlikely haven for drained travelers. The road to this key transit point, near Virunga National Park and its endangered mountain gorillas, now fills with trucks - a barricade against danger and the secret to the area's salvation.

New restaurants and lodgings were once the tin-roofed homes of residents caught up in the intermittent instability and violence between armed groups that plague the region. Safety threats, including killings and kidnappings, on the national highway between Kanyabayonga and other nearby towns, forced provincial authorities to develop a new strategy: organizing truck convoys to ensure safer journeys for drivers and their goods.

Most days, up to 100 trucks carrying goods such as charcoal, bananas, potatoes and lumber line up and await permission to continue their journey. It's the closest thing to a solution for a region searching for peace.

"The convoy isn't what we wanted," says Alfred Katembo, 35, a civil society activist and leader in Kanyabayonga. "But it has become a necessary evil for people."

A row of trucks waits for clearance to begin the journey from Kanyabayonga. Many truckers take advantage of the restaurants and lodging that have emerged in the town since the official convoy began.

Authorities closed the road to Kanyabayonga in late March to prevent the spread of the coronavirus. But they reopened it in May and people once again cluster near the departing trucks.

This area never needed restaurants and hotels before; there were no customers. Travelers avoided the thoroughfare, despite its location near a major highway. Most people, if not all, chose the road between Goma and Butembo, a nearly 300-kilometer (186-mile) bus journey.

But the trucks spurred accommodation and restaurants to start opening in 2015, Katembo says. He counts more than 15 new informal hotels. These businesses sport names like The Flower and The Promise, beckoning those in need of rest and a hot meal.

A local ban on nighttime driving helps them profit. The ban aims to prevent threats from armed groups, but it also means truckers and travelers with nowhere to go can patronize these establishments. The downside to this new transportation mode is slowed travel: Life is dictated by the convoy's schedule.

Motorcycle taxi drivers from areas around Kanyabayonga often drop off people arriving to join the convoy. When that happens, the men and women who operate the businesses hustle to accommodate them. Chantal Kahambu, 35, who started renting small rooms in Kanyabayonga two years ago, says she noticed the need for housing and decided to take advantage of the opportunity.

"Some had to spend the night sleeping out in the open," she says. "Others were forced to sleep on or under trucks or on the side of the road. They were exposed to lots of risks."

If the convoy leaves behind schedule, Kahambu receives an extra seven to 10 customers, she says. Otherwise she gets one to two. A single room costs $5, whether it's occupied by one person or an entire family, and she can make $30 to $40 a day. That's a sizeable amount in a country where, according to a 2018 government report, the average income is less than $3 a day.

Kanyabayonga became a transit hub after local officials organized truck convoys to barricade against safety threats in a region known for violence.

This has allowed Kahambu to open a refreshment bar in Kanyabayonga, which earns about $20 daily.

But her success comes with challenges. Some customers, she says, get up early and make off without paying, and food sometimes goes uneaten when the convoy escort arrives early.

Most residents still welcome this burst of business activity.

The convoy system helps Ghislain Kambale and others who sell agricultural goods make a living.

"Before the convoy departs, we who live here take advantage of it and sell our foodstuffs - like pineapples, corn, yams, bananas - to passengers," he says.

While customers also applaud the changes, they worry about the need for safeguards against threats such as robbers and unhygienic lodging.

"Owners of hotels and accommodations should hold the cleanliness of the rooms dear to their hearts," says Kahindo Mughenyerwa, wife of a convoy truck driver.

But most are just relieved to have a place to rest. Justiva Kavira Vyalirendi, 18, feels especially grateful.

"I was sometimes forced to share my bed with a traveler I didn't know," she says. "With the increase in the number of accommodations, such cases no longer exist."