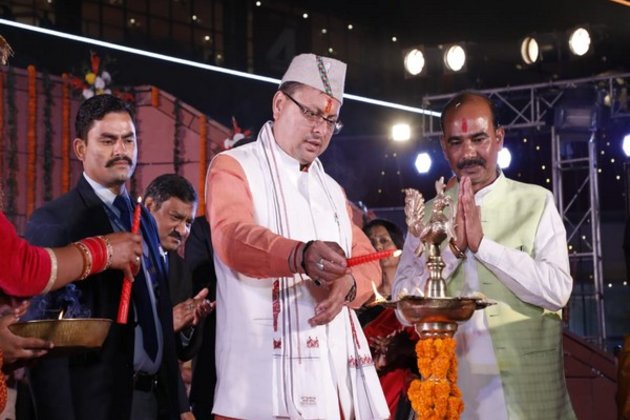 New Delhi [India], November 22 (ANI): Chief Minister Pushkar Singh Dhami on Tuesday participated in the 'Uttarakhand Day' celebrations at a cultural event organised on the occasion at the Uttarakhand Pavilion at the ongoing 41st India International Trade Fair at Pragati Maidan in the national capital.

Colourful performances were staged by folk artistes from Uttarakhand at the Natyashala theatre, on the sidelines of the trade fair.

The theme for the trade fair this year is 'Vocal for Local, Local to Global'.

Dhami said events like the International Trade Fair provide an opportunity to get acquainted with the progress made by different states. "This trade fair is an excellent example of vibrant participation of the people of Uttarakhand," he said.

At the trade fair, Uttarakhand will showcase the sustainable development taking place in the state, the policies and programmes of the state government, handloom and handicrafts of the state and products of the state's agriculture and horticulture sector.

The Uttarakhand CM said, "Good law-and-order situation, clean environment, rail, road and air transport facilities, cheap and uninterrupted power supply and unpolluted water resources make for a congenial environment for investments in the state. Our government is actively trying to develop the state as a most suitable destination for investment. Even in previous years, efforts were made to make maximum use of investment opportunities. Uttarakhand has not only established itself as a preferred destination for investors but is also making continuous efforts in ensuring ease of doing business.""After Narendra Modi became the Prime Minister, hope, faith and new energy have been infused in the country and the countrymen. Under his leadership, the country is making rapid progress in every field. India's respect, honor and self-respect has increased at the global level. A new work culture has started in the country," he said. (ANI)